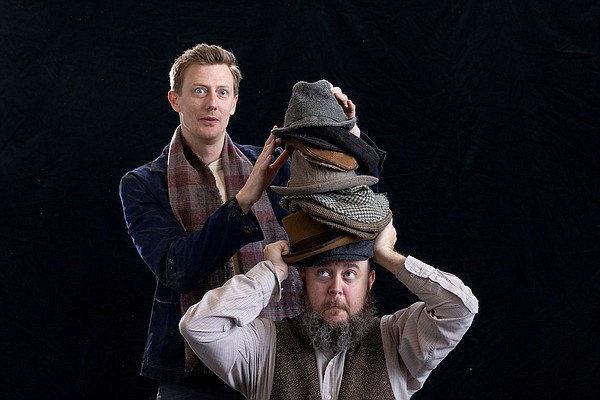 What happens when Hollywood comes to a small town to make a movie? Audiences can find out in the tragicomedy “Stones in His Pockets,” which opened last week at TheatreSquared in Fayetteville.

The production, written by Marie Jones, premiered in 1996 and won the Olivier Award for Best New Comedy. In this iteration, actors Jason M. Shipman and Josh Jeffers play more than a dozen characters, many of them small-town Irishmen cast as extras in an epic American film.

“It’s a virtuosic celebration of the talent and imagination of the actor, as they each play multiple characters,” says Bob Ford, artistic director of T2, hinting at the parallel for the locals, now that more and more more films are shot in our territory. “And…it’s a storyline we see a lot in northwest Arkansas. It’s funny and quirky and ultimately very touching. And it’s Irish, for Pete’s sake!”

To create the stone walls and the look of the Irish countryside, a handful of TheatreSquared craftsmen and a design team spent time in the woods studying rock textures and moss, then pored over photographs of the Irish countryside to find “just the right level of nuance”. to bring this world to life,” says Ford. “Every detail you see or hear represents dozens, if not hundreds, of discarded choices.”

The first time Jason Shipman had the chance to work on “Stones in His Pockets” was when he was a “tiny kid,” he says, more than 10 years ago. He takes pleasure in resuming the game a second time.

“The script has been updated and evolved a bit,” says Shipman. “It’s still a mountain to climb, but I guess you gain a different perspective by climbing it a second time. The story now has more weight and depth.”

“Stones” has been on TheatreSquared’s shortlist for years, Ford says, but this season it seemed right for the mix they had in mind. Associate Artistic Director Amy Herzberg sought out other productions, reviews, and interviews with a view to directing the play with a fresh approach. The process allows her to build from images and ideas that inspire her, says Ford.

As Shipman and Jeffers morph into a dozen oddball characters throughout production, they perform those transitions on stage, right in front of the audience, complete with hat-swapping, collar popping, and other niceties.

“That’s what makes this play an actor’s dream, because it’s up to them to take us on this journey,” Ford said. Costume designer Ruby Kemph helps with the “elegantly revealing details” that enhance the transformation. Everything else is up to the team of two actors. “I can’t stress this enough: these roles come with a ridiculously high level of difficulty, like a 9.9 at the Olympics.”

Ford and Herzberg selected Shipman and Jeffers in part because of their previous experience with TheatreSquared. Shipman was Mr. Marks in “Apparel” and Slank/Hawking Clam in “Peter and the Starcatcher”, among others. Jeffers was previously in “A Christmas Carol” at T2 and in off-Broadway productions of “Julius Caesar” at the New York Shakespeare Festival and “Macbeth” and “The Rover” at the New York Classical Theater.

They were convinced they could bring brilliant comedic sensibility and truthfulness across a cast of characters and a strong emotional connection to their roles, Ford says.

“Stones in His Pockets” revolves around two guys who meet while working as extras on a Hollywood film set in County Kerry. The main character of Shipman is Charlie, from Ballycastle in Northern Ireland, who has closed his DVD shop and started touring Ireland, finding work as he goes.

“I think I’m playing eight characters – some local and some involved in the production of the film,” Shipman said. “Our director talked a lot about how many of these characters struggle for self-worth, are devalued, and don’t feel like they’re in control of their own lives.”

He loves this production because it’s a production that weaves its way into you, and because it challenges and fulfills him in ways he hasn’t encountered recently.

Even if you’ve seen “Stones” elsewhere, chances are the TheatreSquared version is a little different. Ford and Herzberg spoke at length with playwright Marie Jones via Zoom while she was on a writing retreat in Ireland. They discussed a recent and successful version of the play directed by Jones’ son, Matthew McElhinney, in Belfast.

Ford knew he had updated the script, but Jones was able to update him on what had been changed and allowed TheatreSquared to use those unpublished dialogue changes in their production. They also learned about pitfalls to avoid and what the playwright loved most about the play itself.

“It was gratifying to hear so much of our deep-seated philosophy quoted to us,” Ford said. “As the best comedy comes when actors play the reality of their stakes, not when they play for laughs.

“We left the conversation thinking we were on the right track and had quickly made a new friend across the pond.”

2022-11-13
Previous Post: Tears, tributes and a troubled storyline
Next Post: The musician recreates O Saki Saki as a Hollywood movie soundtrack on the violin. Magic, says the internet