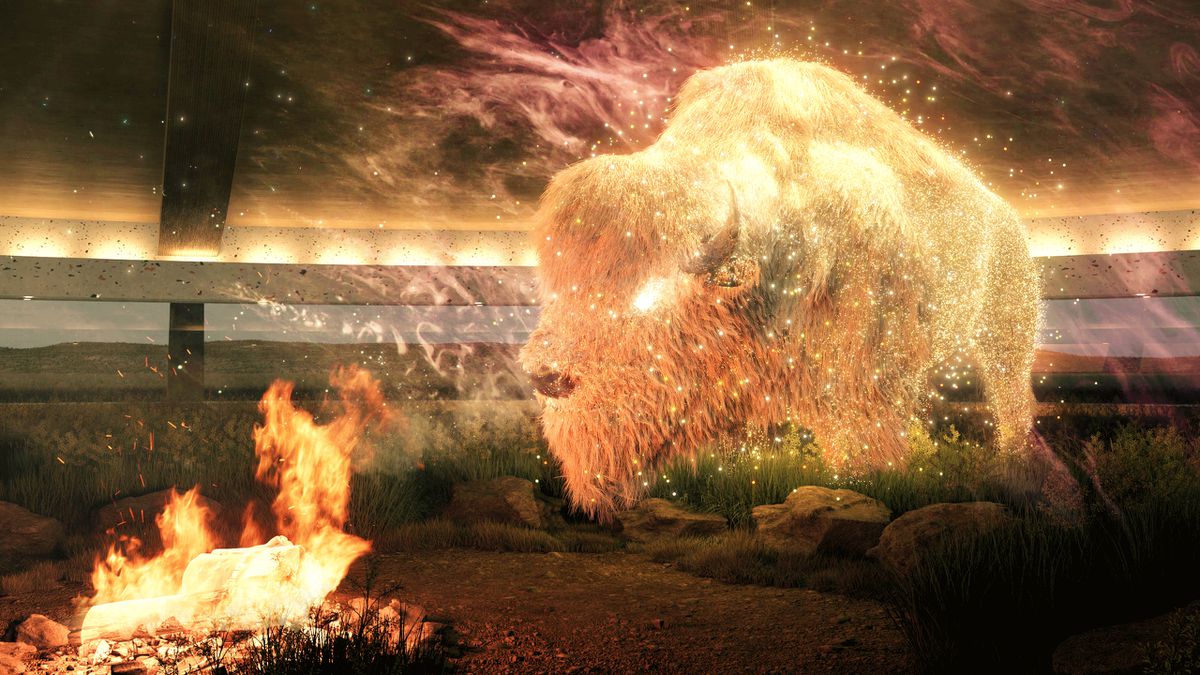 At Sundance, Canadian director Ahnahktsipiitaa proves that the future of cinema is in your head

It’s not a little ironic that the most exciting element of a virtual film festival is its virtual reality component – especially since the relative scarcity of in-home VR technology requires audiences to experience the projects. at a physical event – ​​say, an in-person film festival – where headsets and in-person guidance are plentiful.

But such is the artistic paradox faced by Indigenous Canadian filmmaker Ahnahktsipiitaa (Colin Van Loon), who launches his virtual reality film project This is not a ceremony at this week’s Sundance Film Festival — an event that was supposed to take place in person in Park City, Utah, until Omicron forced a last-minute pivot to, ahem, virtual screenings.

How does it work, concretely, for audiences who wish to discover This is not a ceremony? Well, any Sundance pass holder can visit the festival’s “Spaceship” digital viewing room if they have a Quest or Quest 2 VR headset. (And there are plans via the National Film Board to tour the project across Canada over the coming year.) Still, Ahnahktsipiitaa, who is from the Piikani Nation and grew up in Lethbridge, in Alberta, admits that accessibility with respect to This is not a ceremonyand all VR content, is an ongoing issue.

“Of course, I want as many people as possible to see the film, but the adoption of virtual reality is coming. I think at Christmas, the Oculus app was the most downloaded app on the App Store, so a lot of people are getting these sets,” says artist Niitsitapi, who, like his fellow Sundance filmmakers, originally planned to debut in the heart of the bustling action of Park City. “But the power of presence that virtual reality offers was a really conscious choice. It’s a job that had to be done that way.

Lasting just over 20 minutes, This is not a ceremony deliberately defies easy definition. It’s part documentary, part performance art, part memory game, and completely intense and unforgettable. At the start of the film, the audience is greeted by two indigenous “rogue” poets (Taran Kootenhayoo and Tawahum Bige) and the spirit of a buffalo, all of which serve as guides to two tales of real injustice: the abuses suffered by childhood youth Adam North Peigan (now head of the Sixties Scoop Indigenous Society of Alberta) and the case of Brian Sinclair, whose 2008 death after being left for 34 hours in a Winnipeg emergency room sparked an outcry over systemic racism in the Canadian healthcare system.

The men’s stories are extraordinarily painful to tell and risk scaring away mainstream audiences if presented in traditional documentary form. Yet Ahnahktsipiitaa’s immersive 360-degree video environment rocks with expectation and experience. If, as Roger Ebert once said, movies are “like a machine that generates empathy,” then virtual reality could be an empathy machine rewired as a next-gen model. This is not a ceremony doesn’t just present two victim stories: it places you inside them, asking you to reconsider what storytelling has to offer.

“We were hoping it would be an intense experience because the stories themselves are particularly intense,” says Ahnahktsipiitaa, who spent four years on production, while not working as an operations director for the Vancouver-based Indigenous Matriarchs. . 4 AR/VR Multimedia Lab. “Watching it with a headset gives you a sense of the size and scale of the stories, and the act of witnessing. The responsibility of being a witness.

This is not a ceremony is one of the few virtual reality or VR-focused projects shown at this year’s Sundance, including that of British director Joe Hunting We met in virtual reality, the first documentary filmed entirely in virtual environments. The festival’s last-minute digital pivot, however, only underscores the tensions that exist between the traditional medium on which Sundance has built its name, the way audiences experience stories, and the way those stories are produced and exhibited. If the physical act of going to the cinema continues to be under threat, and if virtual reality is indeed the next stage of cinema – if, as Mark Zuckerberg hopes, we are all destined for the metaverse – there is- isn’t there a setback to a future spent alone in our head-slash helmets?

“Virtual reality is, in itself, very social. At some festivals, there are these group viewing experiences, where all the devices are triggered to start at the same time. It’s a lot like going to the theater traditionally,” says Ahnahktsipiitaa. “I always encourage the people I collaborate with to consider the huge potential here in bringing people closer to history.”

The filmmaker quickly recounts an experience he had when he started developing This is not a ceremony: He was watching a VR project by fellow Canadian filmmaker Lisa Jackson, and came across a part where the viewer’s point of view is placed on a rooftop. With about six degrees of movement, Ahnahktsipiitaa had “this kind of sick feeling” that he couldn’t shake, even though he was actually still.

“If you go to watch a horror movie in the cinema or on television, when a monster appears, you may jump and be scared. But after a while, this effect will wear off because you know something is going to come out. But with VR, that never happens. Every time I looked over the edge of that roof, nothing in my mind could tell my body that it was just in the VR headset. My body reacted every time. That’s where the wealth of potential lies for filmmakers and audiences alike.

Canadian productions at this year’s virtual Sundance include This is not a ceremony and these two feature films:

Baby sitter: A French-Canadian co-production, director Monia Chokri’s black comedy thriller centers on a mysterious babysitter whose presence unsettles a couple on the brink. Expect the film to be released in Quebec later this year.

Framing Agnes: In this Canada/US co-production, documentary filmmaker Chase Joynt explores the life of a transgender woman whose involvement in Harold Garfinkel’s landmark work in the 1960s at UCLA changed the course of gender health research. A Canadian festival later this fall is a good bet.

Fire of Love and Midwives: Canadians are also strong in documentaries: Sara Dosa’s Fire of Love is a Canadian-American co-production following two volcano scientists that has already been picked up by National Geographic Documentary in one of Sundance’s hottest deals. , while the Canadian/German/Myanmar co-production Midwives follows the action inside a medical center in Myanmar.

To bump: This comedy short from Canadian screenwriter and director Maziyar Khatam follows a young man’s “reluctance to let go of a trivial encounter”.

The best of the festival, so far

Midway through Sundance 2022, there haven’t been any massive deals yet (like the US$25 million Apple TV+ given away last year for CODA) or successes at all levels (like last year’s soul summer). So far, potential blowouts, like Lena Dunham’s pointed stick and Cooper Raiff Cha Cha real smoothturned out to be confusing, somewhat polarizing projects.

But there’s respectful praise for the memorable and ultimately heartbreaking sci-fi drama. After Yang with Colin Farrell and Jodie-Turner Smith, Kanye West’s propulsive documentary Jeen Yuhsand the conversation starter document We need to talk about Cosby. But given that those three films entered the festival with cast already attached (A24, Netflix, and Showtime, respectively), there was no breakaway deal that could cement Sundance’s reputation as a true virtual launch pad. At least not yet.

Plan your screen time with the weekly What to Watch newsletter. Register today.

2022-01-25
Previous Post: ‘Station to Station’ Soundtrack Sets Album Details and February Release
Next Post: What to know before borrowing