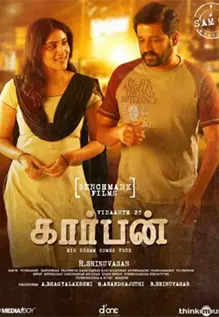 By: Christopher V. Lemieux
In: Filmmaking
Carbon begins with the protagonist Shankar (Vidaarth, solid in his 25th film) waking up from a bad dream, in which he is hit by a vehicle while jogging. He continues his morning run as usual, and as in the dream, a vehicle appears from behind. He manages to get out of his way, and yet he finds himself in an accident which slightly injures him.

Director R Srinuvasan instantly sets up a great premise. We know Shankar is going to have a dream that is going to create problems for him. But before that, the director gives us a solid relationship arc involving Shankar and his father Subburayan (Marimuthu, who plays an endearing character for once). The young man is not on good terms with his widowed father for a reason, and his communication is only through voicemail messages on WhatsApp. In a few scenes, we get a sense of their relationship. Beneath the tiff on the surface there is a deep love and respect. In a neat touch, we see how Subburayan offers money to his unemployed son.

The plot begins when Shankar dreams that his father, driver of a garbage truck, has an accident. He tries to stop it, but like in the opening scene, he can’t. Subburayan ends up in the hospital and to get him treated Shankar needs a huge amount. And the only way to do that is to try to uncover the identity of the hit-and-run driver through his dreams. At the suggestion of a friendly hospital employee, he tries to recreate his day in order to get the dream that will show him who the mysterious character is.

In some ways, R Srinuvasan’s Carbon is a time-looped movie. As in films of this genre, here too the protagonist has to relive a particular day over and over again. But then, this movie isn’t exactly a time loop movie. Here the hero must consciously recreate the same day so that he can achieve his goal. But unlike time-loop movies, here it takes a leap of faith to buy into that premise. For some, it could be as huge as the one Shankar takes after the hospital employee’s suggestion. But the director makes us adhere with clever writing. As Shankar begins to recreate his day, we see him bump into the same set of characters and we see how he develops relationships with them. He even falls in love with one of them (Dhanya B, efficient), who begins to play a bigger role in the scheme of things in these later parts. The director also gives us a twist that works. And the way all of these characters come together in the climax also shows the ingenuity of the writing.

But the problem with the film is that all of its pleasures mainly derive from writing. Because, the Srinuvasan cinema is functional at best. The writing manages to mask the shortcomings of the directing as long as it remains intelligent and engaging. But the staging is very sketchy so in places where the writing is not up to par, the film starts to look like an amateur attempt. Compare that to a movie like Maanaadu, in which directing and writing worked in tandem to deliver a biting thriller. Interestingly, the editor of this movie, KL Praveen, is also the editor here! There are also logical flaws, notably involving the police. Despite the search for the identity of the driver and the discovery of the motive for the attempted murder, we see the police acting in a clumsy manner that emerges. Even the “romantic” parts and Shankar’s decision at the end also needed better writing. This is why the movie just seems watchable when it had the potential to be really great.

2022-01-12
Previous Post: Advocates Again Call for Legislation Capping Payday Loan Rates
Next Post: Andrea Arnold on Cow: “Sometimes when you make a movie, you get gifts from the universe”