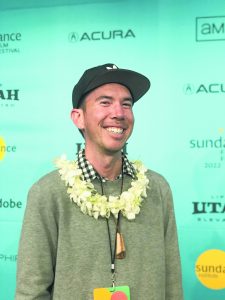 Filmmaking in Hawaii – “EVERY DAY IN KAIMUKÏ” – A SUCCESS AT SUNDANCE

Lee A. Tonouchi
Special for the Hawai’i Herald

2006-Castle-High-School graduate Alika Tengan remains the director and co-writer behind a buzzy film. Earlier this year, his feature debut “Every Day in Kaimukï” entered the prestigious Sundance Film Festival. Shot in a naturalistic style, it’s a film about an aimless skateboarder Naz and his desire to leave the small town of Kaimukï. And if that’s not nuff, the talentless Japanese/Chinese/German/Hawaiian/Okinawan filmmaker already has his next feature already lined up, thanks to a hefty $500,000 grant from Google. I went to talk history with Alika where he dropped a bit of science on the art of cinema.

LT: For your short films, your name is wuz Alika Maikau. But suddenly for “Every Day in Kaimukï” you became Alika Tengan. How come you came to Okinawan all of a sudden?

AT: Tengan is the maiden name of my Tutu. Alika is still my first name. It’s still a Hawaiian name. But I also felt very connected to my Asian heritage, so that was kind of the mana’o behind that name change.

LT: Why did you come as a filmmaker?

AT: I think for most of my school career at Castle [High School] and even to [the University of Hawai‘i at Mänoa], writing was the one thing I wasn’t great at so I always gravitated towards creative writing and then I started a liberal arts degree at UH and when I found out that they had this film program called the Academy for Creative Media, it seemed like a really interesting way to combine my interests, like Hawai’i stories, writing, and music. With the movie, I could share all the things I care about in one format.

LT: What is the best wisdom you received from film school?

AT: Certainly one of my greatest mentors is Lisette Flanary. She was one of my native film professors at UH. When I had her in 2011, she brought Taika Waititi to our class to talk. He had just done the movie “Boy”, which I really loved and obviously he wasn’t the famous Taika he is now. But seeing this Polynesian talking about this film so specific to the place where he grew up in New Zealand, it really inspired me. It made me say that I wanted to do this for Hawaii.

LT: In “Every Day in Kaimukï” (“EDIK”), the protagonist Naz has a difficult character to understand because it’s not really clear what he wants and he spends most of the film skateboarding with his friends. We don’t really know what his career ambitions are and he has a vague feeling that he wants ‘more’, but he’s not quite sure what that means. So tell us why should we root for this guy?

AT: I think it’s really difficult when you feel like you’ve gotten over a certain situation, but you can’t explain why to people who matter to you. Like it was one thing if he just got a job in New York, it was very easy to explain to people. But when you don’t have concrete reasons, it’s much more difficult and your friends don’t really understand, like in the movie. I think we liked that it was more ambiguous, even if it risks the audience not fully understanding the character’s motivations.

LT: Did celebrities come up to you at Sundance to tell you how awesome you are?

AT: Unfortunately it was supposed to be in person, but they canceled it a week before due to [the] Omicron [variant pandemic restrictions], so it was mostly virtual. But you know Destin Daniel Cretton, he shouted at us on Instagram! (Laughing)

LT: The film has a visual style that feels raw, so even though I was familiar with a work of fiction, I felt like I was watching a documentary. Try to say how you got there.

AT: My friend, [co-writer and star] Naz Kawakami thought he was going to leave Hawai’i in February or March 2021 and I approached him around Thanksgiving 2020, so there wasn’t much time to hang around. He and I kind of had these intense writing sessions throughout the first week to put together a plan. We used Naz’s real story about his move and incorporated a lot of his friend group and some of my friends as well. And it turned out that they were all wonderful actors. Since they had a pre-existing dynamic with Naz, we kind of played on that. In terms of the amount of improvisation, I’d say it ended up being about 50/50. We had written the basic stuff, but it had so much character that it could just riff on whatever was going on at the time.

AT: Me and my DP Chapin Hall, we shot a short film called “Moloka’i Bound” in 2019 and we used my roommate Holden Mandrial-Santos and we really liked the way it turned out, so we decided to write a feature film script based on the short film and we were set up for this Google and Array grant for up-and-coming filmmakers and we were lucky enough to be selected for it. We hope to make this film this year.

LT: Would you advise aspiring filmmakers to make films faster if they want more truth? Do they ruin their films by having too many scripts and actors?

AT: (Laughs.) Well, it’s funny because with my “Moloka’i Bound,” we’ve been trying to do this feature for about two years now and the script is completely fleshed out with a lot of actors. Maybe I should take my own lesson from “EDIK” and just go shoot it. (Laughs.) No, I think it depends on the story you’re going to tell. Sometimes you need a lot of resources to tell a bigger, grander story. But there was something about the energy of knowing that we didn’t have a lot of time, so it forces you to follow the momentum no matter what.

AT: (Laughs.) I just wanted to show that not everything I do has to be a huge Pidgin, not that I’m against it. And for my feature film “Moloka’i Bound”, it will be more centered on Pidgin. But the reality is that not everyone speaks Pidgin in Hawaii. Most people do it on some level, but we just wanted to portray a different side growing here.

LT: Can Dea be a Hawaii hit movie with all the real Pidgin in it?

AT: I hope so. I don’t know how big of a blockbuster “Moloka’i Bound” could potentially be, but I think it’s going to be a really interesting litmus test.

LT: A common thread running through your films is the effects of colonialism on the native Hawaiian population. In the world of your shorts, Hawaiian characters struggle with health issues like diabetes, drug addiction, how incarceration affects family unity, and loss of language and cultural knowledge. Try talking about how important you felt to highlight those issues.

AT: These are just the things that the Hawaiian community has been dealing with for a very long time. And the power of film is to reconstruct narratives or refocus narratives. Many movies and shows have been filmed in Hawai’i and used it as a glorified backdrop, but native Hawaiians have rarely been the focus of those stories and so our story has been told by many, many. other people and I think the power of film is that you start to pick up the story.

LT: In “EDIK”, Naz gives his philosophy of being a DJ: “I think a lot of people try to play music as if everyone would like this song. Whereas I feel like I’ve taken an approach where it’s like a person would probably like that song. Because I feel like if you try to play only songs that everyone will like, you kind of limit yourself. I’d rather have one person dancing in their car than a hundred people just having it in the background. Is it a metaphor for what you think of cinema?

Lee A. Tonouchi’s book “Significant Moments in the Life of Oriental Faddah and Son: One Hawai’i Okinawan Journal” won the Association for Asian American Studies Book Award. And his East-West players are playing “Three-Year-Old Swim Club” with one of the Los Angeles Times Critic’s Choice selections.