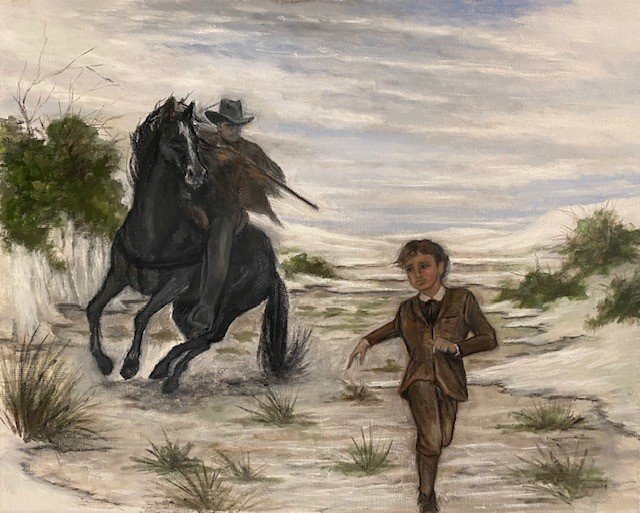 “Chalk Hill” is a story that began with two Alamogordo brothers and ended as a screenplay about a father and son who are now part of the history and traditions of southern New Mexico and the Old West.

State Senator Ron Griggs from Alamogordo has always been fascinated by a book he read from his grandparents about the disappearance of Albert J. Fountain and his 8-year-old son Henry at the end of the 19e century near where he and his brother Jeff grew up.

Ron suggested to Jeff, a professional actor, to turn the story into a screenplay. Jeff, who lives in Los Angeles with acting credits that include TV shows, movies, and a Southwest Airlines TV commercial that’s currently airing, liked the idea.

After five years of research and writing, Jeff completed the screenplay earlier this year and is teaming up with the New Mexico State University Theater Department for a staged reading at Las Cruces this month. -this.

“Chalk Hill” is the title of Griggs’ screenplay and the name of the site near the White Sands Missile Range where the 1896 murders likely took place. This is an area the Griggs brothers know well, having explored it several times over the years.

In fact, it was Ron Griggs who put his brother in touch with the head of the NMSU’s drama department, Wil Kilroy.

The “Chalk Hill” character cast includes people involved in the murders and their investigation, including Old West icons such as Pat Garrett and Billy the Kid, the Fountains and their alleged murderers, rancher Oliver Lee and his employees. Jim Gililland and Billy McNew; Lee and Gilliland were found not guilty of the murder of Henry Fountain in an 1899 trial held in Hillsboro, New Mexico. They were championed by Albert Fall – another real character in the storyline – who would go on to become one of New Mexico’s first United States senators and later spend a year in federal prison for his involvement in the Teapot Dome scandal under the Harding administration.

Fall had a lot of influence in the courts, Griggs said, and Lee was a powerful rancher who would become a state senator and have a state park to his name.

In his research, Griggs said he learned that Lee publicly stated that he never killed a man who didn’t deserve to be killed.

“It’s a fascinating thing to say for someone,” Griggs said. Lee was “okay with taking another man’s life, okay with being a judge, jury, and executioner,” he said.

“They didn’t call it the Wild West ‘for nothing,” Griggs said. At the time of the Fountain murders, the territory of New Mexico, he said, was “a lot like Chicago. by Al Capone ”.

Griggs said people were particularly outraged by the Fountain murders because one of the victims was a child.

Territorial Governor William Taylor Thornton knew the murders would not help New Mexico’s efforts to become a state, Griggs said. He brought Doña County Sheriff Ana Pat Garrett into the 1898 investigation, and Garrett “did what he could to do justice to this egregious crime,” Griggs said.

The bodies of Fountain and her son have never been found and no one has ever been convicted of their murders. But in calling attention to the crime, “by doing what we could to hold men accountable, we suggested to the rest of the world that we had a level of stability and that we could govern ourselves.” , said Griggs.

“Finding the humanity of these characters” was one of Griggs’ goals when writing the script, he said. He drew on historical documents “to develop characters”, while others were based on Griggs’ father and grandfather, whom he called “the most honorable men I have known”.

“Chalk Hill,” said Griggs, is “a period piece set on the incredible canvas of southwestern New Mexico.” The site “lends itself to the most extraordinary cinematography,” he said. “It’s just one of the most beautiful and breathtaking places ever.”

Griggs last explored Chalk Hill with Ron in September, he said, watching the sun set behind “the gray-blue giants of the Organ Mountains (with) a gigantic moon above Dog. Canyon, “as he imagined Fountain and his son crossing in a buckboard.

Griggs is a graduate of NMSU, where he was mentored by Tony Award winner Mark Medoff. Another career influence is Oscar-winning cinematographer Janusz Kamiński, whom Griggs met when they worked together on a shoot in Moscow, Russia.

Developing “Chalk Hill” into a movie, Griggs said, allows him to use everything he’s learned in film “to do the best job I’ve ever done.”

2021-11-05
Previous Post: Halle Berry announces all-female rap soundtrack for Netflix movie “Bruised”
Next Post: Ryan Reynolds takes a step back from the movies to spend more time with his family