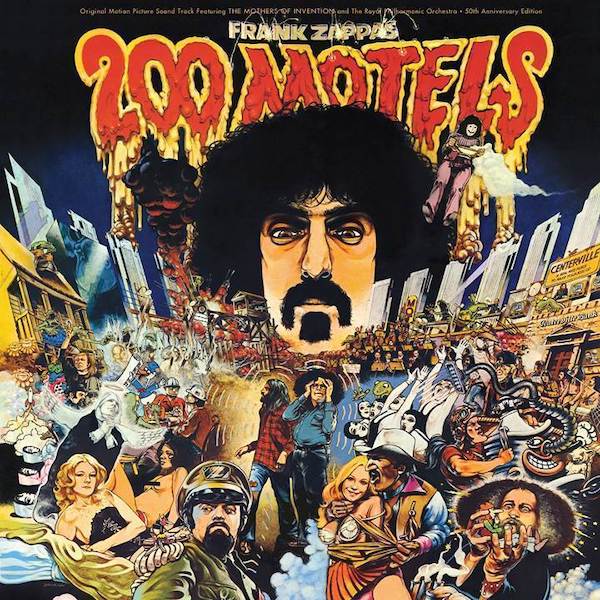 Here is the press release:

Los Angeles – September 24, 2021 – Released in October 1971, Frank Zappa’s “200 Motels” was a miraculous feat, a cinematic collision of the kaleidoscopic musical and visual worlds of the revered musician and songwriter who reunited Zappa and his band, The Mothers, Ringo Starr as Zappa – as ” a great dwarf “- Keith Moon as the evil nun, Pamela Des Barres in her acting debut, noted comedian Theodore Bikel, the Royal Philharmonic Orchestra, and an incredible assortment of characters (both on-screen and hors) for a “surrealist documentary” on the bizarre life of a musician on tour. A heady, psychedelic stew of low and high brow art forms, the film, written by Zappa and co-directed by him and Tony Palmer, mixed irreverent comedic skits, insane satire, mind-blowing animation and virtuoso musical performances. onscreen from both The Mothers and RPO for a fascinating and free multimedia extravaganza. Shot in just 10 days on a budget of around $ 650,000 from distributor United Artists, “200 Motels” was one of the first films to be shot entirely on videotape and Zappa and his team pushed the limits of the possibilities of the film. a booming new medium, in particular thanks to its use of spectacular visual effects – and at the time – at the cutting edge of technology. Described by Zappa as â€œboth a reporting of actual events and an extrapolation thereofâ€¦ other elements includeâ€œ conceptual by-products â€of the extrapolatedâ€œ actual event â€â€¦ In some respects the content of the film is autobiographical â€,â€œ 200 motels â€was hailed by the Los Angeles Times as anâ€œ amazing achievement â€withâ€œ just the right touch of craziness â€and theâ€œ most wacky cinematic fantasy comedy piece since â€œA Hard Day’s Nightâ€ of the Beatles â€by Daily Variety.

The music and corresponding soundtrack were equally diverse, a wild pastiche of avant-garde rock and orchestral compositions interspersed with dialogue from the film. Until that time, compositions like the final piece, “Strictly Genteel”, were among the most ambitious pieces ever written and recorded by Zappa. The band in the film and on the soundtrack consisted of Frank Zappa (guitar and bass), Mark Volman (vocals and special equipment), Howard Kaylan (vocals and special equipment), Ian Underwood (keyboards and winds), Aynsley Dunbar ( drums), George Duke (keyboards and trombone), Martin Lickert (bass), Jimmy Carl Black (vocals) and Ruth Underwood (orchestral drums), not to mention the aforementioned Royal Philharmonic Orchestra. In Zappa fashion, as he wrote in the album’s original cover notes, â€œThis music is not in the same order as in the movie. Some of that music is in the movie. Some of this music is not in the movie. Some of the music for the film is not in the album. Some of the music that was written for the movie is not in the movie or the album. All of this music was written for the film, over a 4 year period. Most of it (60%) was written in motels while on tour.

To celebrate the golden anniversary of “200 Motels”, Zappa Records, UMe and MGM have assembled a definitive six-disc Super Deluxe set of the beloved, but hard-to-find soundtrack, for release on November 19. Fully licensed by the Zappa Trust and produced by Ahmet Zappa and Zappa Vaultmeister Joe Travers, the monstrous 200 Motels 50th Anniversary Edition brings together the soundtrack, newly remastered by Bernie Grundman at Bernie Grundman Mastering, along with a staggering amount of rare and unreleased material. unearthed from FZ’s Vault, including the original demos, studio shots, work mixes, interviews and movie commercials, plus newly discovered dialogue reels, revealing a first audio cut of the film. A wealth of unreleased audio material surrounding the project is also included.

Discs 1 and 2 feature the remastered soundtrack with the second half of the second disc consisting of demos and demo takes; two of the many highlights of these sessions include never-before-seen alt mixes and alt takes of tunes from Chunga’s Revenge, “Road Ladies” and “Tell Me You Love Me”. Discs 3 and 4 contain the “Dialog Protection Reels”, which reveal a first version of the film, while discs 5 and 6 feature unreleased clips, alternatives and historical nuggets sequenced in the order of the original filming script, as Zappa had initially envisioned before. it encountered time and budget constraints. These illuminating discs reveal for the first time Zappa’s original intention for the film.

The six-disc set will be housed in a 64-page hardcover book in a beautiful 12 “x 12” case. The packaging reproduces the original booklet updated with revealing new notes from Pamela Des Barres, Ruth Underwood and Joe Travers, as well as Patrick Pending’s essay from the 1997 reissue, and is packed with cinematic illustrations, photos and images from the film. and its workmanship, many that have never been seen before. This must-have collector’s version will also include a personalized “200 Motels” keychain and Do-No-Disturb motel door hanger and a life-size replica of the original movie poster. Years of preparation, all audio was meticulously identified and transferred over several years as Travers dug in the vault to create a new high resolution 96K / 24B digital patchwork stereo master from the original analog tapes. Vault hardware was mastered by John Polito in 2021.

The remastered soundtrack of 200 Motels will also be reissued on vinyl as 2LP pressed on 180 gram black vinyl and also as a limited edition red vinyl pressed on 180 gram vinyl, which will only be available exclusively through Zappa.com,uDiscoverMusic.com Where SoundofVinyl.com. Both will be pressed by Optimal Media in Germany and this will be the first time the album has been available on vinyl in decades. The soundtrack will also be released on 2CD and all formats will include a scaled-down version of the film poster. Additionally, the entire Super Deluxe Edition box set will be available digitally for streaming and download, marking the digital debut of the soundtrack, in standard and high-resolution audio. Pre-order for all configurations is available now.

2021-09-24
Previous Post: The scenario of a former CSUB takes off | Entertainment
Next Post: “And if…?” Marvel’s Episode Seven Soundtrack Now Available