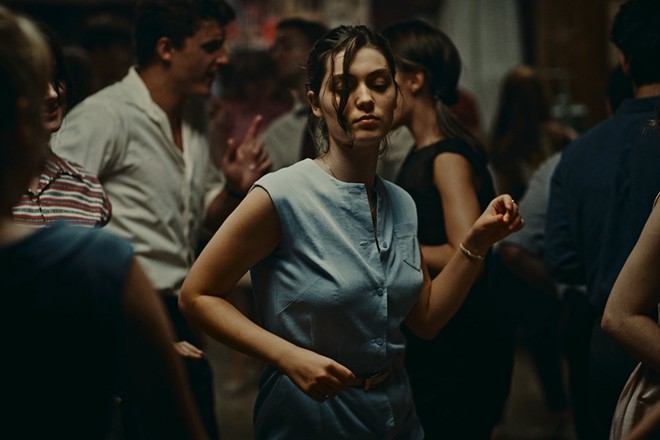 Life is not a party for Anne by Anamaria Vartolomei in Event.

Happearing is a drama about a young student in a small town in France in 1963 in need of an abortion, a medical chore made extremely difficult because abortion is banned. I saw this French film for the first time at the beginning of March, and it was a harrowing and much needed cinematic experience.

I watched Event right after the Supreme Court leaked that the justices will overturn Roe vs. Wade, effectively banning abortion in large swathes of America. Anyone who paid attention in recent years knew it was coming, but the apparent confirmation was still shocking. Watching this film for the second time with the almost certain certainty that what it depicts may soon no longer be historical but the current reality was like a kick in the teeth.

I cannot overstate the urgency of this film; movies don’t get much more essential than that. It’s true that anyone who thinks abortion should be illegal is unlikely to seek an overwhelmingly sympathetic dramatization of the trauma of being pregnant when you don’t want to, when staying pregnant will derail the future you’re working towards. But even those who categorically support safe and legal access to abortion should see it. I suspect that many people, especially those who are too young to remember how things used to be, don’t realize how reproductive health care for anyone who could get pregnant was a nightmare and could soon be again.

With startling intimacy, director Audrey Diwan immerses viewers in the psyche of Anne (Anamaria Vartolomei), an independent woman in her twenties who discovers she is pregnant as she prepares to go through the rigorous entrance exams to a prestigious university. Diwan and cinematographer Laurent Tangy use a 1.37:1 aspect ratio, a boxy look that replicates films of that era. But – much more important – the frame constrains Anne. She is stuck in her predicament, with no easy way out.

On-screen labels count the progress of her pregnancy – “3 weeks”, “4 weeks”, and so on – as she desperately explores her incredibly limited options, even though she is unable to speak directly to nobody about them. “The law is ruthless,” her appalled doctor tells her when she alludes to abortion; prison is a real possibility for anyone who helps him. Other men take chilling advantage of her vulnerability and the ignorance of pregnancy that her world has instilled in her. She has close friends, but doesn’t dare tell them about her situation either…and the judgment of other naughty, naughty young women at school hardly bears to think about. The internalized misogyny is real: Girls and women can be brutal enforcers of the patriarchy while being a “good girl” elevates you, if only slightly, above “bad girls.” Feminine solidarity, where Anne finds it, is cold and thin.

An adaptation by Diwan and Marcia Romano of Annie Ernaux’s semi-autobiographical short novel titled The event, the original title translates to “The Event”. And we can assume that what happens now will be the defining moment in Anne’s life. If she dies from a clandestine abortion (which is not improbable) or has the abortion or has the baby; if she ends up in jail; whether she will continue to have the life she wants, on her own terms and on her own schedule, or not. The isolation of her experience – even as so many other women walk the same path – is suffocating.

This is a horror movie. Anne’s life boils down to suppressed understatements as her schoolwork suffers and her time runs out. Vartolomei’s intense performance is one of concentrated terror, a scene with which she must remain still and silent lest anyone guess what she is enduring. Event is a body horror conjured up by knitting needles and prepared medical instruments on a kitchen table, more suggestive than purely graphic, but enough is enough. This is what we look at once again. Don’t look away. ♦

At the Magic Lantern Theater

2022-05-12
Previous Post: Shopify, Square among companies hoping to ease e-commerce slowdown by lending money to merchants
Next Post: The soundtrack to “Silverton Siege” is the sound of resistance