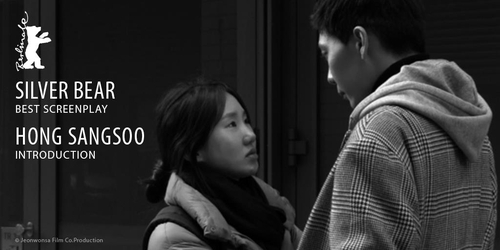 Hong has been honored at the prestigious film festival for the second year in a row, after winning the Silver Bear for Best Director for “The Woman Who Ran” last year.

The 71st Berlinale was held entirely online Monday through Friday due to the Covid-19 pandemic and the announcement of the awards was broadcast online.

â€œMore than telling a story or effectively advancing a narrative, this script fabricates those momentary intervals between one action and another,â€ one reads on the official Berlinale website, â€œwhere, for a moment, a truth hidden from man, life is suddenly revealed, luminous and lucid.

With Shin Seok-ho and Park Miso, the film, divided into three chapters, tells the story of a young man and his girlfriend who reflect on the relationships between them and with others.

Instead of a thank you speech, Hong uploaded a video to the official Berlinale website. The two-minute video first shows a letter of gratitude to the jury and festival organizers. Next, it shows a snail slowly crawling across a rocky surface, with actor Kim Minhee’s buzzing voice in the background singing the song “Que Sera Sera (Whatever Will Be, Will Be)”.

â€œI found this young snail a long time ago while walking with Kim Minhee at our house,â€ Hong wrote in the letter. “And I wanted to show you this snail as a little gift.” It is a difficult time. Take care of yourself, take good care of yourself.

Kim has been a muse for Hong, appearing in several of his films, including “Introduction”. She won the Silver Bear for Best Actress in 2017 for her performance in Hong’s â€œOn the Beach at Night Aloneâ€. In 2017, they admitted they were in a romantic relationship. Since Hong got married and his wife refused him a divorce, the relationship with Kim has sparked controversy in Korea.

From this year, the Berlinale will no longer award separate prizes for acting to male and female actors. Her first-ever gender-neutral award for Best Principal Performance went to German actress Maren Eggert for her performance in the sci-fi comedy “I’m Your Man”.

2021-03-07
Previous Post: Hong Sang Soo wins Best Screenplay Award for “Introduction” at Berlin International Film Festival
Next Post: Why “Borat 2” was nominated for Best Screenplay Adapted to the Oscars, not the Original Screenplay