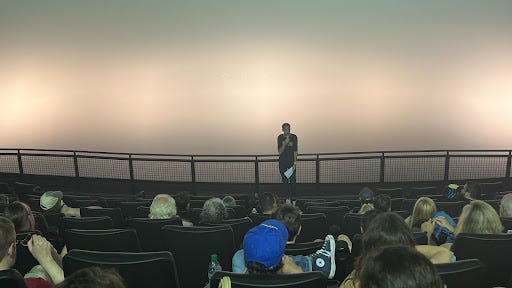 Grab some popcorn, turn off that phone, and sit down. Last Labor Day weekend, the Tallahassee Film Festival held its 14th annual Independent Film Showcase, screening nearly 50 features and shorts from across the United States and around the world. Festival attendees ranged from independent film newbies to underground arthouse writers.

Opening up the legacy of the festival, the names of past attendees have gone from relatively unknown status to Hollywood royalty in their own right. Some of those former filmmakers include Denis Villeneuve (“Dune”), Bong Joon-ho (“Parasite”), and Florida State University film school superstar and Oscar winner Barry Jenkins (“Moonlight”). ).

Even though the aforementioned writers and directors have won critical acclaim and their artistic endeavors are funded by a seemingly endless stream of Hollywood money, they all started out as low-budget independent filmmakers – armed only with a camera, the love of the art form and a story that is dying to be told.

Owning all three, Justin Zuckerman, winner of the TFF People’s Choice: Best Feature, screened his feature debut “Yelling Fire in a Crowded Theatre” at the festival. According to its website, the film is “a loving tribute to the young masses who continue to flock to the greatest city in the world” and tells the story of Lisa – a recent college graduate who moves to Brooklyn in hopes of to find a purpose.

The true definition of low-budget cinema, the passion project was shot entirely on a MiniDV camera in a matter of days, with a budget “below the rent of the Brooklyn apartment in which it was shot”.

“I wanted to make a movie that was going to be fun…with my friends, and just to see if it was possible to do something with no money or resources – but something worthwhile nonetheless,” Zuckerman said.

Working on his creative, independent production in the studio gave Zuckerman the creative freedom and career gratification he wanted when he first attended FSU’s College of Motion Picture Arts a decade ago. The sentiment was shared by many of the other creators present, in particular TFF President and Creative Director Chris Faupel.

Faupel is a graduate of FSU and was part of the organization of the Festival — a tiny but efficient, all-volunteer 501(c)(3) nonprofit organization — for its 15 years of existence. First a film programmer – someone who chooses the films that will be screened – for the organization before taking up his current position, he has always been a film buff and a strong supporter of independent filmmakers.

” A big part of [the festival] for me, it’s being able to shine a light on films and filmmakers who are rising,” said Faupel.

Before filmmakers can even reach the “rise” stage, they must decide whether to take the leap of faith and pursue filmmaking in the first place. Attending the festival, Gage Kroyer, a 23-year-old Tallahassee resident from Cape Coral, Florida, decided to take the plunge and follow his passion for filmmaking. Inspiration is one of his main reasons for attending the festival.

Over the summer, Kroyer worked on freelance sets for FSU film students and hopes to eventually study at the prestigious, award-winning film school himself.

“I’m glad to see [the films] because they’re on a lower level… As an aspiring filmmaker, I’d work with even less,” Kroyer said. “It’s cool to see how people make films without studios; how they make them independently, learn a bit, get inspired… all that.

As the TFF organization quickly begins planning for next year’s event, there’s no denying that this year’s festival, its organizers, filmmakers and volunteers deserve an extended standing ovation. Generate credits.

2022-09-12
Previous Post: If you must be immoral, be honest about it
Next Post: Bad Bunny’s ‘Un Verano Sin Ti’ Surpasses Encanto Soundtrack As Biggest Album Of The Year