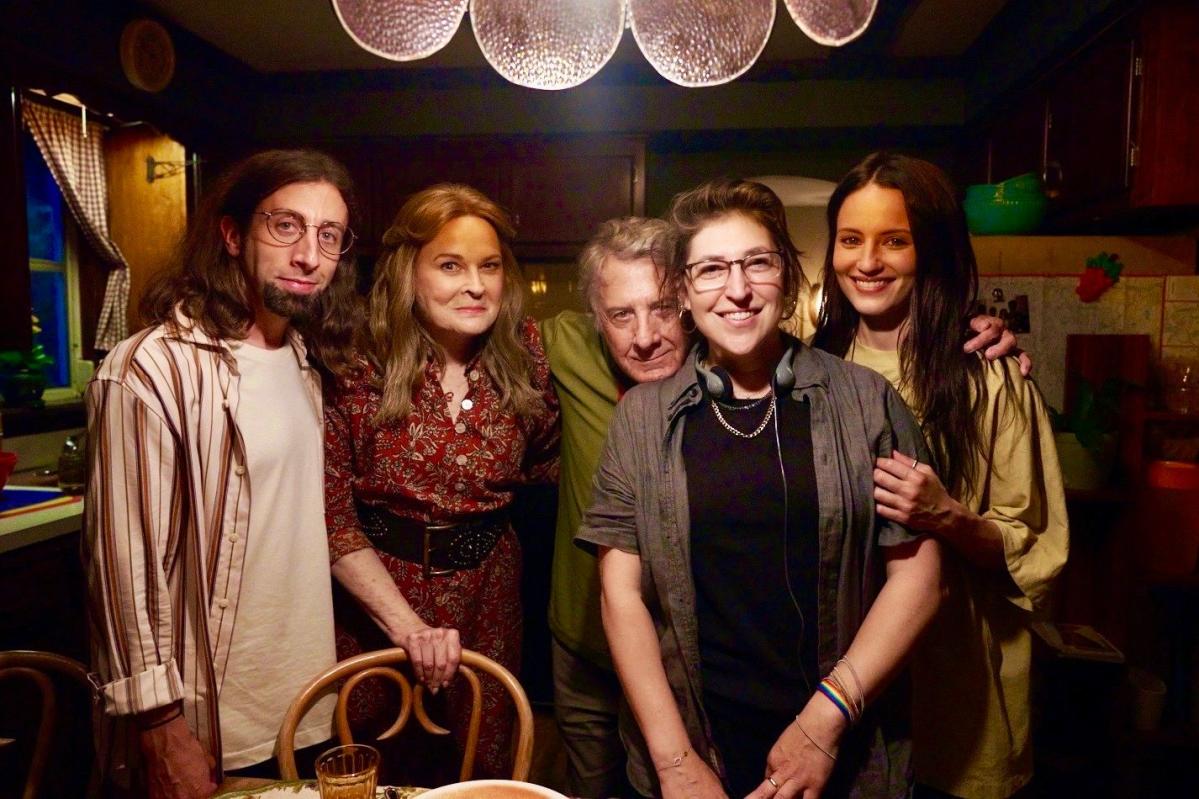 When Mayim Bialik lost her father, Barry, in 2015, it took her an entire year to mourn his passing. “There is a year of mourning in traditional Judaism,” said the Peril! host — who identifies as Modern Orthodox — tells Yahoo Entertainment Now. “After this year, it’s a bit like a veil lifting.” (Watch our video interview above.)

And when that veil lifted, Bialik decided to channel his grief into his art. The result is How they made us, the former child star’s feature debut, which follows a family loosely inspired by her own. “I keep reminding my mum, ‘It’s not that this is what I remember detail by detail,'” she laughs. “It’s a way of telling a story that has the scaffolding of things that happened or were brought up.”

Bialik’s on-screen alter ego is Abigail (Joy star Dianna Agron), a divorced single mother caring for both her children and her aging parents, Barbara and Eugene, played by Candice Bergen and Dustin Hoffman, respectively. How they made us travels back and forth in time between Abigail’s childhood and adulthood, describing family rifts that still reverberate today and led to a rift with her brother, Nathan (Bialik’s former The Big Bang Theory co-star, Simon Helberg). In the process, the film candidly deals with the failings of each member of this particular family, whether it’s neglect or, in one shocking scene, physical abuse.

It’s not a spoiler to reveal that Eugene – who, like Bialik’s own father, suffers from a degenerative disease – dies in the final act of How they made us. Leading Hoffman through a scene she had experienced in real life was a way for her to observe grief from a different perspective.

“Death is not difficult, but dying is,” she explains. “There’s nothing more difficult than breastfeeding your parents when they die. It sounds like a pretentious director thing to say but…I didn’t think about it emotionally. My work as a director is to listen to what David Mamet says about directing: telling the simplest story in the most discreet number of shots possible.”

By telling a version of her own story on screen, Bialik hopes it will bring comfort to viewers still grieving. More importantly, she hopes to entertain them. “I know it doesn’t mean, ‘Oh, I want to go see this movie,’ she laughs. ‘Because the movie is also very funny! It’s a good time. But sometimes you end up with more questions than answers when someone walks by. That’s why it’s so important to me that [this film] be universally interesting to people. Especially if you come from a specific family, there’s a lot of dynamics that will resonate with people. There is also a specific complexity in the joy and the struggles.”

How much of your own childhood do you think is in the film, in the end?

I will say that there is a set of people and experiences that kind of came together to create this family. My belief is that every family has things that often cause people to drift away or get too involved – especially in families where there’s a lot of love, a lot of creativity, and a lot of connection. That doesn’t mean it’s the whole story. I based it on all those families who grew up with any type of conflict: conflict, mental health, abuse, alcoholism. This is a big part of the conflict that can arise.

Let’s talk about the cast: You appeared in an episode of Murphy Brown when you were younger. Have you kept in touch with Candice Bergen?

I hadn’t kept in touch with her. I didn’t even know if she remembered me! But I reached out and she asked to meet me. The script really spoke to her… she said it really, really moved her. She said, “I’m not Jewish,” but she grew up in Beverly Hills, so she said she probably knew more about Yiddish than a lot of Jewish kids in Los Angeles! [Laughs] She actually improvised some of her Yiddish in the film, which is really awesome.

Did she get your mother’s seal of approval?

The dream of the first generation [American Jews] in the 1940s was to be ephemeral. So when my mom heard that Candace Bergen had been chosen to be my mom, she was like, “That’s perfect.” [Laughs] I thought, however, that it was best that they did not interact in the same physical space. It was just too much information.

What was it like directing Simon Helberg after acting opposite him for all those years on The Big Bang Theory?

My father died while I was taking The Big Bang Theory, so Simon knew my dad and knew my family – he knew everything that was going on in my life. He was the first person I imagined in my head, and I never thought he would. And he did! I didn’t even have to beg. He’s a true master of comedy and he has such depth of emotion. His performance is heartbreaking. There’s a lot of intensity to his role in terms of the impact of his estrangement from the family. And it was amazing to see him and Dustin Hoffman together. There’s one in the scene in particular where our whole team was amazed to see them working.

Did you consider someone else to play your father, or was Dustin Hoffman always your first choice?

Never in a million years would I have thought that as a first-time director, Dustin Hoffman would want to work with me! But apparently the script really moved him. He’s one of those people from LA who totally feels like he’s not from LA, and that’s what people usually say about me! So I definitely connected with him. My target audience is Dustin Hoffman: the older guy who likes to tell stories and dad jokes. This is my vibe! [Laughs]

There is an intense flashback in the film where Eugene punches Abigail. What was the thought behind this scene?

You know, in the 70s and 80s, there was a lot of sweetness in life then. But in many families, a big part of mental health issues is people hurting themselves, and it can look like a lot of different things. It’s a scene that was hotly debated in internal conversations, because there was this question: Is it free? And it never occurred to me to put something in the movie for free.

It’s a very raw film and a very honest film. Many unfortunate things happen in families where there is untreated mental illness. My cinematographer, David Feeney-Mosier, and I wanted to be very careful how we presented it. We wanted the flashbacks to feel like you’re observing something you don’t normally see. For all the kids who suffered when no one was talking about it, it’s a little nod to how we need to be resilient and persevering, and end up being good parents. I tried to show that Abigail does things differently [as a parent] to the best of his abilities.

How did the film make you think about your own role as a parent? Could you imagine slapping one of your children?

I was a parent at a time when it’s part of a conversation we have, and it’s a very controversial topic. As a scientist and as someone who has studied neuroscience and brain development in particular, I happen to be a person who doesn’t believe that, so to speak. I believe it exists, but it’s not my way. We definitely know things differently now than in the 70s.

What I’ve discovered as a parent is that the times I’m closest to hurting someone are when my patience is at its lowest. It’s never been in a moment of peace and quiet where I’m my highest self and I’m well rested and good at work. It’s never then that I say to myself: “Is hitting someone the solution?” It’s always when I run with fumes, you know? I would like to think that all of us in our highest selves wouldn’t think of hurting another.

What kind of conversations have you had with Dianna about playing a character that isn’t you, but is inspired by you?

Some people said she reminded them of me, and I thought, “I should be so lucky to walk through life with those cheekbones!” Abigail was the hardest part to play, and I wonder if it was because people were like, “Is this Mayim’s story?” But Dianna did a lot in the service of the film. She has a lot of personal connection to being that girl. I love watching her get very, very raw. There’s a crying scene where there’s stuff coming out of his nose. I didn’t put it there! [Laughs]

Now that you’ve made this film, do you see yourself telling different kinds of stories as a director or will they all be in this personal vein?

You know, I didn’t even allow myself to like to think that much, because there’s so much pressure for newbie writers and directors, and I’m aware that I’m considered a sitcom actor who got a Ph.D. in neuroscience and returned to acting. So there’s a lot of stigma around so many aspects of this, and it’s hard for me to dream about that anymore. I know I stand on the shoulders of women like Eliza Hittman and Greta Gerwig – they are the female directors I admire so, so much. I watch the kinds of films they make that are deeply meaningful and deeply personal and revolve around some of the most complicated things we experience while telling entertaining and engaging stories. I have a million stories in me. We all do, really.