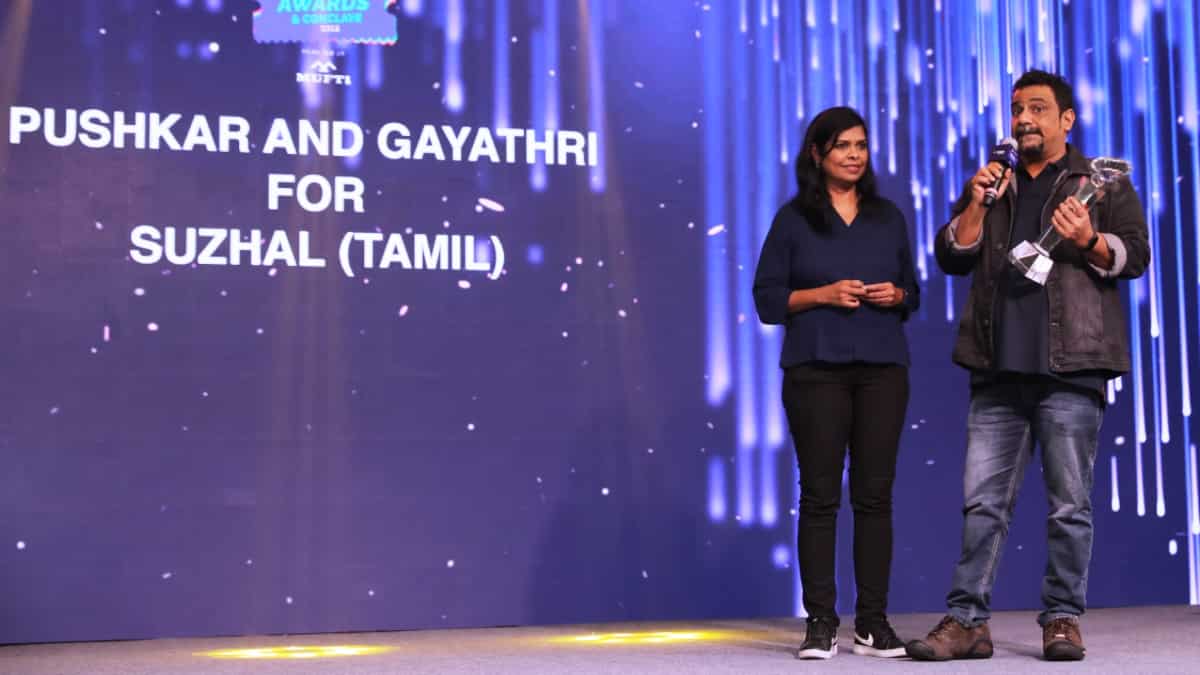 Suzhal, Amazon Prime Video’s first Tamil web series, which was released three months ago on the OTT platform, was awarded Best Screenplay (Series) at the 2022 OTTplay Awards held in Mumbai a few years ago. days.

Popular directorial duo Pushkar Gayathri, who created and scripted the acclaimed series, were more than happy to receive the recognition and remembered their association with the project.

Ever since Suzhal was announced by the directors, moviegoers have been excited about its star actors. Aishwarya Rajesh, Parthiban, Sriya Reddy and Kathir played key characters in the Bramma and Anucharan-led series. The eight-episode project dealt with the mysterious disappearance of a teenage girl.

How her parents, older sister, and cops set out to track her down to make some shocking revelations about the village they reside in forms the rest of the story. The story takes place against the backdrop of Mayana Kollai, a unique festival which is celebrated in few parts of Tamil Nadu.

Suzhal opened to unanimously positive reviews from critics and moviegoers. It is considered as one of the best binge-worthy series by Tamil audiences, thanks to its unique plot, gripping storytelling style, impressive direction, intriguing storyline, effective plot twists complemented by flawless performances from the main artists. .

A few performances like that of Aishwarya Rajesh, Sriya Reddy and Harish Uthaman have garnered huge appreciation. The suspense factor and the way the investigation unfolds to the end are some of the highlights that made Suzhal such a jaw-dropping series. The thriller has also been praised by moviegoers in other languages. It was released in over 30 languages, including French, German, Thai, and Italian.

The Journey of Pushkar Gayathri

The filmmaking duo made their directorial debut with Oram Po in 2007, in which Arya and Pooja played the lead roles. The film, which dealt with the lives of motorists in Chennai, opened to rave reviews due to some of the impressive aspects of its storytelling.

Their second project, Va: Quarter Cutting, released in 2010, starring Siva and Lekha Washington in the lead roles, drew praise for the way the dark humor was handled. Later, the directors took a break for a few years and returned with Vikram Vedha, which became one of the biggest hits in Tamil cinema in 2017.

The gangster drama, which starred Madhavan and Vijay Sethupathi, also received critical acclaim and impressed moviegoers. The film helped them win several awards for their extraordinary direction. Pushkar Gayathri later collaborated with Halitha Shameem’s Aelay as creative producers for the project which also won critical acclaim for its screenplay.

The directors expressed their excitement after receiving the Best Screenplay (Series) award for Suzhal at the event and said it was great to be a part of the deal that integrated all film industries.

Gayathri said, “Suzhal was our first step into the OTT world. It’s really inspiring to receive the award. We’re really thrilled.” Pushkar added, “I like that this award has integrated all languages, there is no language barrier or separation here. Today, language has become immaterial with the advent of space OTT. We should start reaching out to a wider audience. I’m happy with the recognition our work has received.”

The makers are now eagerly awaiting the release of Vikram Vedha’s Hindi remake which will be released under the same title on September 30. Hrithik Roshan and Saif Ali Khan try out the characters played by Vijay Sethupathi and Madhavan respectively in the remake.

The Bollywood trade has pinned high hopes on the action movie and is expected to open with huge numbers at the box office. Moviegoers are also confident that the multi-star gangster drama can ring the cash registers, becoming the much-needed blockbuster in the Hindi film industry.

A while ago, Pushkar Gayathri hinted at the possibility of teaming up with Ajith for a project. Although it’s too early to tell, the star’s fans are delighted with this unusual collaboration. In a previous chat with OTTplay, the directing duo said they might also come up with a Suzhal sequel, if all goes well.