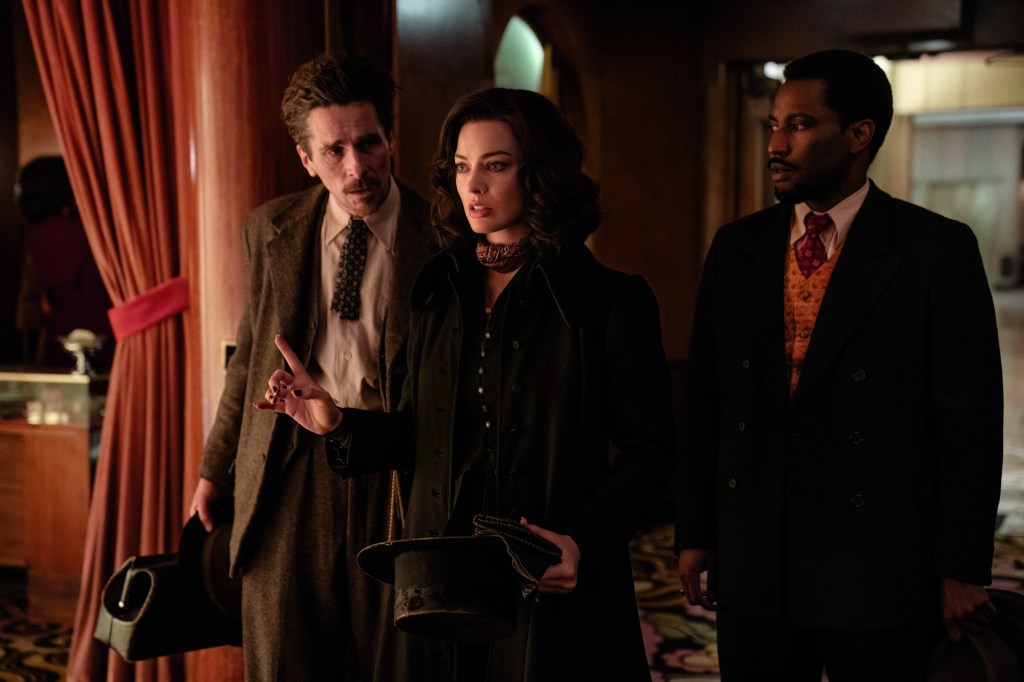 Script and cast overloaded for “Amsterdam”

An occasionally funny, beautifully edited period mystery, and relevant social satire from one of the country’s top filmmakers, “Amsterdam” is dead on arrival for a number of reasons. Chief among them is a script by director David O. Russell (“American Hustle”) that is mostly dense exposition and a wide cast of characters played by talented actors, who, despite their talent, are difficult to follow. One of them is a young woman played by pop star Taylor Swift, who is perhaps memorable for being the first to leave the stage. The movie is mostly set in the early 1930s, when American fascists try to overthrow the government (yes, it happened).

The action centers on three pals, whose lives and loves were never so fulfilling as when they lived together in eponymous Amsterdam shortly after World War I. The war is where Dr. Burt Berendsen (Christian Bale) lost an eye and part of his face. and replaced the eye with a glass one. Berendsen’s best friend is black veteran Harold Woodman (John David Washington), who was forced to fight in a French uniform because of the racist policies of the United States. Sometimes speaking French, Margot Robbie plays the valiant nurse Valérie Voze, who gets her patients Berendsen and Woodman out of the hospital and ends up being their lover and muse. She creates artistic collages (frankly hideous looking, maybe a metaphor) using the metal shards she has extracted from soldiers’ bodies. Paging David Cronenberg. With his looping eye and absent-minded manner, Berendsen will remind some viewers of Lt. Columbo and the charming actor Peter Falk, who played him and truly had a glass eye. (I interviewed Falk in New York once. He was a lovely man.) Berendsen, who also looks like Al Pacino, is developing new and better ways to deal with disfigured soldiers.

Also in the mix are two bird-loving spies played by Michael Shannon and a heavily made-up, foreign-accented Michael Myers. Voze, Woodman and Berendsen, who is married to heiress Beatrice Vandenheuvel (English chameleon Andrea Riseborough) return to the United States. Fifteen years later, Bert and Harold are called in to investigate the murder of the senior officer who introduced them to the war (Ed Begley Jr.), Swift’s character’s father, with the mysteriously useless help of officers. NYPD. by Matthias Schoenaerts and Alessandro Nivola. If I start to lose you, believe me, I was lost too.

Enter Robert De Niro (Russell’s “Silver Linings Playbook”) as the heroic General Gilbert Dillenbeck. Valerie was kept drugged and locked away by her evil brother Tom (Rami Malek) and his wife Libby (Anya Taylor-Joy). This Daphne du Maurier victimization of Valerie goes against what we learned about Valerie when she was the valiant nurse and muse, but never mind. Chris Rock appears as Harold’s hot-tempered and, of course, funny winger, Milton King.

“Amsterdam” is wonderfully filmed by three-time Oscar winner Emmanuel Lubezki (“The Revenant,” “Birdman,” “Gravity”) and boasts a memorable score by Daniel Pemberton (“The Trial of the Chicago 7”). The whole enterprise, including material on the Ornithological Society, feels like a failed, if often funny and clever, adaptation of a non-existent novel by anti-establishment polymath Thomas Pynchon (“V.” “Gravity’s Rainbow “). The difference is that “Amsterdam” is based on a true story. Sadly, this shocking truthfulness does little to save the film from itself.

2022-10-06
Previous Post: The Smile Soundtrack Gets Vinyl Release From Mondo
Next Post: Ruben Östlund: 5 films that inspired my own cinema