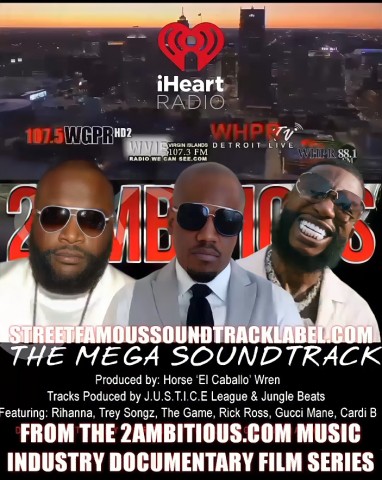 Preview of STREETFAMOUSSOUNDTRACKLABEL.COM as it released 2AMBITIOUS.COM THE HIT RAP & R&B DOCUMENTARY SERIES SOUNDTRACK on iHeart Radio featuring an interview with the film’s producer.

As well as putting a name to the next generation of “RM” generation for the Rap music generation. 2ambitious.com answers a lot of real music industry questions that will be like a beacon of hope for new artists to follow for 300 years or more from Street Fame Magazine www.streetfame.info Founder & Film Producer award-nominated Horse ‘El Caballo’ Wren Season 1 of the series is the cliffhanger, and has indie music career talents and fans who want more and more answers hoping that part 2 of this brilliant documentary on the music industry quickly follows sooner.

Rent or buy the hit documentary 2ambitious.com on Vimeo On Demand – https://vimeo.com/ondemand/376817

Described as a “globally successful independent documentary series that combines interviews with celebrities and high-profile music label executives, which is the first of its kind to become a feature film”.

The music industry documentary nominated for the award in Best Urban Media: