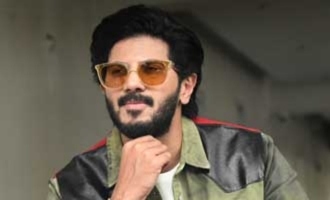 Dulquer Salmaan is betting big on ‘Sita Ramam’, which he says isn’t in the routine mold. The August 5 release, directed by Hanu Raghavapudi, is by far the first full-fledged love story to come from Vyjayanthi Movies.

In freewheeling conversation, the versatile actor talks about the film.

You have been busy with the promotions of the movie, criss-crossing different cities in Telugu States. Tell us about your experience.

It was great. For some reason, I couldn’t immerse myself in the experience of going on Mahanati’s hit tours. The response I saw for ‘Sita Ramam’ is therefore all the more special. It was not planned. I am grateful for all the love.

There have been many love stories, some of which are period dramas. What distinguishes ‘Sita Ramam’ from others?

I would say it’s an original story. It’s a classic. And it’s a rare love story. You have never seen a story like this before. The storyline is gripping and unpredictable. What you’ll see in the film far exceeds the glimpses you saw in the trailer.

You said you wouldn’t make any more love stories. Why is that?

I get older year after year. I want to make consummate stories that evolve. They must be fresh and original. After ‘Sita Ramam’, I don’t want to do a short-term love affair.

What is your favorite song from ‘Sita Ramam’?

It is ‘Kaanunna Kalyanam’. Vishal Chandrasekhar’s music is exceptional. When I listened to the story, I knew the music would be wonderful. Each song is a visual marvel. The BGM is as great as the music of the songs.

From the teaser and trailer, you seem like a nice soldier who isn’t used to stereotypical portrayals. Is not it?

Lieutenant Ram, my character, is an orphan. He doesn’t hate anyone. He is a happy and positive soul. He is also a patriot when it comes to his country. Not only Ram, Sita Mahalakshmi is also a well etched character. When you read a classic novel, you imagine the heroine to be this or that. Sita is like that. Mrunal Thakur did his best to play it. Rashmika Mandanna also has a rare character. She is an energetic performer. “Sita Ramam” is also enriched by interpreters of different languages ​​including Telugu, Tamil (Gautham Menon) and Bengali (Jisshu Sengupta).

What was it like traveling with Vyjayanthi Movies for the second time?

Ashwini Dutt and Swapna are like my family. Ashwini Dutt garu is a friendly human being who is my favorite. His love and affection are touching. He reserves the best for me.

You have made 35 films over the last 10 years in different languages. How was this possible?

To be honest, the number is not huge. My contemporaries make 12 films a year in Mollywood. My father sometimes made 30 films a year.

Are you drawn to the pan-Indian film trend?

I’m tired of hearing the term “pan-Indian” over and over again. Amitabh Bachchan, Rajinikanth and Shah Rukh Khan have made films for all Indian audiences in the past. It’s not new. A movie should just be called a movie.

What would you have been if you hadn’t been an actor?

I did my MBA. Maybe, I would have been an investor.

2022-08-03
Previous Post: DiMarzio: AC Milan gets cold on Tanganga, Reguilon
Next Post: The script of ‘Masoom Sawaal’ is full of innocence: Kamlesh Mishra